What Is Latex Modified Concrete?

Latex modified concrete is a blend of latex solids — usually around 15 percent — mixed with the concrete at a microscopic level. These solids and how they act once in contact with an inorganic surface are vital to creating the external waterproof layer. 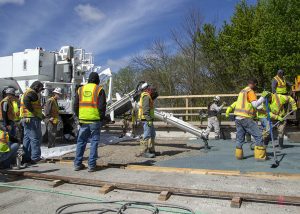 In colder climates, bridge decks undergo a freeze-thaw cycle more severe than other types of concrete infrastructure. This is because they’re exposed to weather conditions on the top and bottom, unlike sidewalks and other concrete flatwork. These structural components contain an immense amount of reinforcing steel. Yet, latex modified concrete (LMC) is a common way to protect the steel with a bridge deck overlay.

People expect roads and bridges to be free of snow and ice shortly after the storm subsides. In response, highway departments use salt-based deicing materials on the surface. If the concrete has cracks, the deicing salt materials may reach the reinforcement steel below, causing the steel to rust. Because rust occupies more volume than iron, the bridge deck deteriorates more quickly due to rust expansion. Highway engineers now require a long-lasting material that repairs the damage and prevents deicing salts from reaching the reinforcement steel.

How A Volumetric Mixer Protects The Mix Integrity

Lasting Results For Heavy Use Roadways

With an annual average daily traffic of 113,100 vehicles on Interstate 55 in Livingston County, Illinois, the wear and tear takes a heavy toll. In May 2019, Henry Frerk Sons took part in a $2,000,000 interstate reconstruction project with the Illinois Department of Transportation (IDOT). Using two Cemen Tech mixers, including a 25-year-old unit, the company poured LMC as part of a complete bridge deck replacement. The bridge was one of 184 across the state targeted for improvement or construction during fiscal year 2019, according to IDOT.

Delong Concrete in Lexington, Kentucky began using volumetric mixers with LMC in the early 1970s as part of bridge deck work the company handled. While bridges are a significant part of their work, the company added several Cemen Tech units to augment the accuracy and precision required this type of work.

The result was a growing reputation for handling latex concrete overlays. As the demand grew, Delong Concrete added employees who travel around Kentucky, Tennessee, and other states for requested jobs. 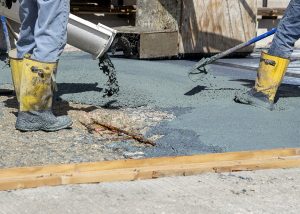 In the 1960s, Dow Chemical developed an overlay material using LMC. Laboratory studies showed potential for the usage of the resulting concrete for bridge decks.

The resulting concrete showed potential to be used in bridge decks when tested a laboratory. Conversely, field testing revealed the conventional delivery systems had underwhelming results. With this in mind, a Dow employee tried the newly patented and manufactured mobile mixer, called the “Concrete Mobile.” This mixer gave engineers control over their concrete production on the job site. The LMC could now reach the potential shown in the lab. All specifications going forward required the use of an on-site mixer for the overlay production.

Another method is the “Hi-Density” or “Iowa Low Slump” overlay. As the name suggests, it was developed in Iowa in the 1970s. The mix has a high cement content with a low water-cement ratio with a maximum water-cement ratio of 0.32 while plus or minus specifies the slump. This mix wasn’t tested using traditional barrel mixers as it would set up in the barrel without adding more water. But, it rivals the previous LMC overlay on performance. Producing this mix requires the use of a mobile mixer at the job site so the mix is fresh. Again, this allows engineers to achieve actual field performance that matches lab observations.

If you have comments or questions about the types of latex modified concrete, bridge decks, or mobile concrete mixers, we would love to hear them! Call us at (800) 247-2464 or send us a message on our Contact Us page.